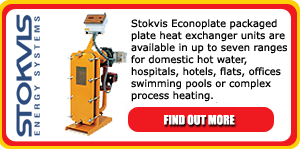 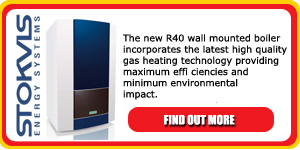 Plate heat exchangers are used to change the temperature of a liquid, vapour or gas media. A thin, corrugated plate is used to transfer the heat from the media on one side of the plate to the media on the other side.

A frame with end plates, squeeze heat transfer plates, within which, portholes channel the media. These channels are sealed by gaskets which direct the hot and cold media, respectively, into alternate odd and even number channels. As one fluid flows in the odd number channels, the other flows into the other evenly numbered channels.

Thin plates keep two media of different temperatures apart while allowing heat energy to flow between them through the plate. Heat energy transfered across the plate creates changes in the temperatures of the two media. The hotter of the two becomes cooler, while the colder one becomes hotter.

When used in conjunction with high efficiency, fully modulating, condensing or semi condensing, gas fired boilers such as the Stokvis Econoflame range of boilers, a very powerful, versatile package evolves.

On their own, plate heat exchangers help to alleviate the concern about Legionnaire’s Disease and when packaged together with these boilers they offer a compact, space saving alternative to the traditional approach.

A recent innovation from Stokvis is the ‘C’ Series of Econoplate Plate Heat  Exchangers. The ‘C’ series has been specifically designed to operate at lower flow levels and return temperatures and to combine seamlessly with fully condensing boiler operation thus giving optimum efficiency and optimum performance, vital points to bear in mind in view of the new EPB Directive and Part L requirements.

or use the form below